Milan is a very inviting city, offering many cultural and social activities; a frenetic, restless rhythm is part of both work and leisure, so much that it is difficult to stay unmoved and not to get overwhelmed by all the cultural stimuli. Ancient and modern, full of trends and counter-trends, Milan is a laboratory of artistic experiments full of contradictions and continuously changing.

Milan was founded by the Insubres, a Celtic people. Due to its strategic position, the Gaulish city was conquered by the Romans in 222 B.C. and annexed to the Empire with the name Mediolanum or “Roma secunda” (Second Rome). After 313 A.D., the year in which the Emperor Constantine issued the Edict of Tolerance towards Christianity, many churches were built and the first bishop was appointed: Ambrogio was such an influential person that the Church became the Ambrosian Church and in the first half of the year 1000, the Archbishop of Milan became the most powerful political figure in the whole of Northern Italy. 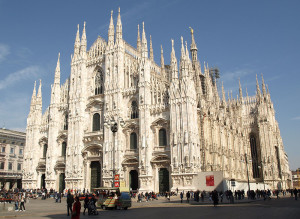 During the Middle Ages, Milan flourished as a commercial and banking center: when the noble family of Visconti came to power in 1300, it brought about a lengthy period of splendor and wealth for the city when monuments were built, including the famous Duomo in 1386, that soon became the city’s symbol. The Sforza family took over from the Viscontis: sciences, art and literature developed and both Leonardo da Vinci and “il Bramante” were called to the Court of Ludovico il Moro.
Over the course of centuries, Milan has been alternatively dominated by France, Habsburg Spain and Austria, until 1859 when the city was eventually annexed by the new Kingdom of Italy. In fact, when Charles V came to the throne in 1535, the city began a period of almost two centuries of Spanish rule, which is described by Alessandro Manzoni in his classic book I Promessi Sposi (The Betrothed). In 1859, the Austrians were driven out of Milan and the city was annexed to the Kingdom of Piedmont, which then became the Kingdom of Italy in 1861. During the early 1900s, Milan led the industrialization process of the young nation, being at the very center of economic, social and political debate. Milan was immediately chosen as the economic and cultural capital of Italy, and has maintained this title up to the present day. 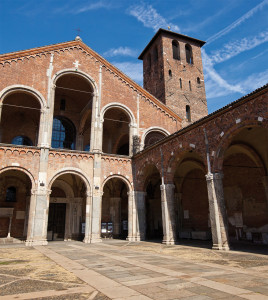 A selection of the most interesting churches and museums in Milan that must be visited.
Visit the greatest symbols of religion in Milan: the ancient Basilica of Sant’Ambrogio in romanesque-lombard style; the huge, majestic Duomo that houses almost 3500 statues including the famous “Madonnina” that is covered in 3900 pieces of gold leaf; the wonderful Basilica of San Lorenzo Maggiore, located opposite the Roman columns that are the only remains of a third-century temple, that includes many different architectural styles; Santa Maria delle Grazie where may be found in the refectory Leonardo da Vinci’s The Last Supper, which is one of the most famous works of art ever painted. 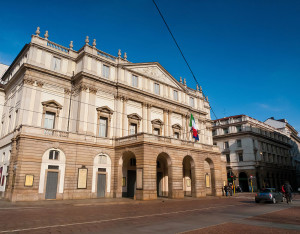 You can’t miss La Scala Theater Museum the interesting museum that houses exhibits of various costumes and theatre sets that are of great historical and artistic value; the Pinacoteca di Brera set up in 1809 by Napoleone Bonaparte: it houses a great number of works of art including masterpieces by artists such as Piero della Francesca, Raffaello, Mantegna, il Bramante and Caravaggio. The courtyard holds a wonderful statue of Napoleon that was created by Canova; the Pinacoteca Ambrosiana, Milan’s oldest museum that is home to masterpieces by artists such as Caravaggio, Leonardo da Vinci, Raffaello and Botticelli; The Museum of Ancient Art housed in the splendid Castello Sforzesco, and is home to some of the most important sculptures that help to understand Lombard history and Museum of Science and Technology, named after Leonardo da Vinci with 40,000 square meters of exhibition space for subjects ranging from astronomy to computers. The models and machines built to the design by the great Tuscan genius cannot be missed.

This stretch of water dated back to around 1100 was only made navigable from the Ticino to the center of Milan at the end of the 14th century, to transport the marble that was needed to build the Duomo. The Milan Wharf was an important commercial port for river transport for many centuries and was still in use up to the end of the Second World War and then closed permanently in 1979.
Today the Naviglio Grande and the Naviglio Pavese (that connects Milan to Pavia) make up one of the most charming places in Milan, with the old, typical houses, antique shops and hundreds of clubs standing on each side, perfect for the traditional “happy hour”: from 6 pm to 9.30 pm in Milan you can drink cocktails accompanied by buffets with several courses, pasta, meat or fish.

This is one of the most exclusive and fashionable places in Milan.
Located in the historic centre, Brera houses the Brera Academy of Fine Arts, the Brera Art Gallery and the Braidense National Library, as well as botanical gardens and an astronomical observatory. Brera is a place of bohemian atmosphere, sometimes called “the Milanese Montmartre”. Here you can meet artists, visit refined boutiques and sit at historic open-air restaurants and coffee-shops.

This huge and fascinating park with its lakes, meadows and little bridges stands behind Castello Sforzesco. It is the ideal place to spend a Sunday afternoon in the fresh air. The Park is home to monuments such as the Arena Napoleonica, the Tower designed by Giò Ponti, the Triennale di Milano and the Arco della Pace (Arch of Peace), a XIX century triumphal arch.

This was built around 1870 and is called the “Salotto di Milano” (Milan’s Parleur): it is full of coffee-shops, restaurants, boutiques and historical bookshops.